The trial was conducted by two midwives at Paul Gellé Hospital Maternity (Roubaix, France) from October 1, 2012 to January 31, 2013.

The postpartum hemorrhage is a serious complication of childbirth that may involve life-threatening to the mother (first cause of maternal death). To prevent this issue, 5 IU oxytocin is injected in a systematic manner, even for patientswithout particular risk. Few studies exist in the literature about the effect of acupuncture on delivery of the placenta [16, 17, 18].

The two midwives contacted a dozen maternity hospitals in France (Strasbourg, Rouen, Lille, Brest, Paris, Lens, etc.), but also in Canada. After telephone conversation with midwives of these hospitals, they learned that acupuncture is not or is rarely used for the third stage of labor. The reasons were lack of time and trouble to choose the most suitable points.

In this OPC type study, the two points SP6 (sanyinjiao) and KD16 (huangshu) were selected. They were punctured as soon as possible after cord clamping.

Twenty nine pregnant women were included.  The endpoints of the study are: time between infant birth and placenta expulsion; decrease of bleeding, decrease of postpartum hemorrhage, number of artificial delivery of the placenta.

The endpoints were compared with the standard norm derived from published clinical trial results, and reviewed by the Cochrane Collaboration [19], serving as a substitute to the traditional control group.

a. Delay between the birth of the infant and delivery of the placenta

In spontaneous delivery of the placenta, the time is estimated less than 10 minutes. This value is the same in the OPC trial as the one found in the Cochrane Database 2001, revised in 2004 [19]. According to the literature, it is necessaryto act if the delivery did not take place after 30 minutes. In this sample of patients who benefited from the acupunctural method, the longest delivery is 13 minutes, with an average time of 7min 23sec. There is no statistically significant difference between the delivery promoted by acupuncture and the delivery promoted by oxytocin (χ2 test, p> 0.05). Therefore the use of acupuncture is as effective as pharmacologic method to reduce the length of the third stage of labor.

b. Amount of blood loss and number of postpartum hemorrhage

The Cochrane Collaboration in 2004 and updated in October 2009 (seven RCTs, n> 3,000) [19] indicates fewer postpartum hemorrhage (clinically characterized by a amount of blood loss equal to or greater than 500 ml) when oxytocin is used in preventive measure (relative risk (RR) for blood loss greater than 500 ml = 0.50; confidence interval (95% CI = 0.43 to 0.59) compared to no treatment. Furthermore, the average amount of blood loss in this OPC trial was 374 mlversus 548 ml in the control group reported by the Cochrane Collaboration. In this sample of 29 patients, the average amount of blood loss in immediate postnatal is 210 ml. One patient presented a hemorrhage with blood loss estimated to 550 ml. (Figure 3). 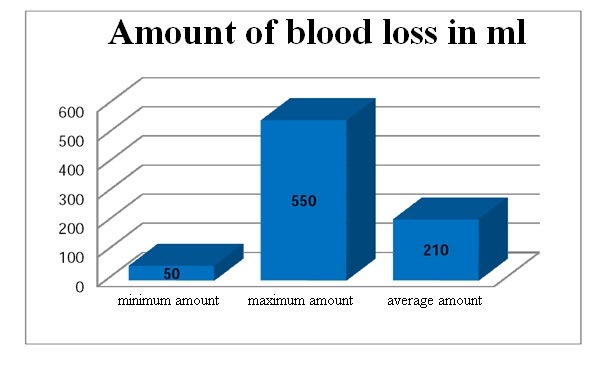 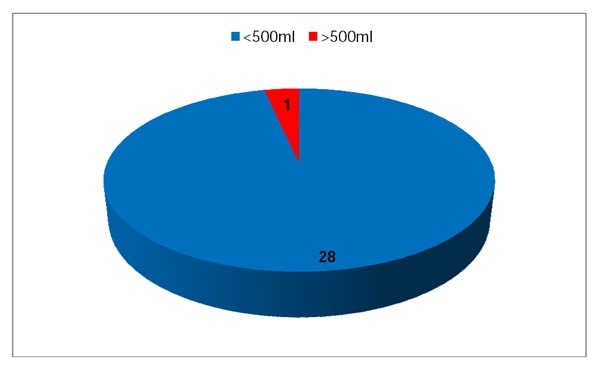 c. Number of artificial delivery of the placenta

This study showed that acupuncture is beneficial on the delivery of the placenta. The results must be confirmed in a randomized controlled trial with a larger number of participants. If the upcoming clinical trial is based on OPC concept, an update of the latest data of the Cochrane Collaboration in 2013 [20] and 2015 [21] is needed.